Right then. That’s it from the coverage of this game. The action in the Indian T20 League will resume on 14th April 2022. It is a game which sees a contest between Rajasthan and Gujarat. The first ball will be at 7.30 pm IST (2 pm GMT). But as you all know, you can join us early for the build-up. Till then, take care and goodbye!

Mayank Agarwal, the captain of Punjab wins the MAN OF THE MATCH award. He says that it was a great game for them and they are happy to get those crucial points. Adds that the game had a lot of ups and downs but they won the crucial moments of the game. Tells that at the start of the tournament the message was quite clear for everyone in their team – they will be going hard with the bat. Says that they batted smartly in this game and ensured that they keep wickets in hand as well. Mentions that they had to change some of their strategies when Varma and Brevis were batting, but luckily they got in a couple of run outs. Says that they have the experience of Rabada but the other bowlers have been doing well for them.

Stay tuned for the presentation…

Odean Smith is in for a chat. He says that the last game made him stronger and he backed himself with the ball in this clash. Adds that they planned well for the batters and got some good suggestions from his teammates.

Rohit Sharma, the Mumbai captain, says that they played pretty well but it is just that the run outs cost them the game. Adds that they batted well for a majority of the innings but applauds Punjab’s bowlers by saying that they held their nerves and executed their plans. Mentions that they will need to keep fighting hard. Says that Punjab got off to a great start with the bat and they put pressure on their bowlers. Adds that 199 was chaseable on this deck but Punjab bowled well at the backend.

This fixture was never short of entertainment! Punjab pick their third win of the season and move to the third spot in the points table. The bowlers took a harsh beating in patches, especially Rahul Chahar who went for 29 runs in his first over when Dewald Brevis took the attack to him. Punjab were right on top by picking two wickets inside the Powerplay but might’ve gotten derailed in the middle-overs. The fourth-wicket stand of Mumbai took the advantage away from Punjab. Although, Punjab regained their advantage in the death overs. Odean Smith was the highest wicket-taker with a four-fer but Arshdeep Singh and Kagiso Rabada deserve a lot of praise for their economical spells.

Uff! What a fight did the Mumbai lads put up. All the players gave it their all but could not get over the victory line. Mumbai came into this game with one less batter and they might regret making that decision. Rohit Sharma got his side off to a flyer but Mumbai could not continue on its merry way, as they lost the opening pair inside the Powerplay. The two youngsters stepped up for Mumbai. Dewald Brevis and Tilak Varma stitched a solid stand of 84 runs to get the chase back on track for Mumbai. The former was the aggressor but missed out on his maiden Indian T20 League half-ton. Suryakumar Yadav was a part of two run-outs at the crease, which ended up putting all the pressure on his shoulders. In the last over, Mumbai lost three wickets, as Odean Smith showed them the exit door.

Oh dear! What a game this was, filled with full of twists. The five-time champions have recorded their fifth loss on the trot. Agony for the men in blue. The pendulum swung hard in both directions but in the end, Punjab came out victorious to add on to the misery of Mumbai.

19.6 overs (0 Run) OUT! CAUGHT! There it is! Third wicket of the over and Smith makes sure that he takes his side over the line this time around. Another ball that is into the surface, around off. Mills swings his blade. It takes the top edge and goes towards the cover fielder. The skipper, Mayank Agarwal settles under it and takes a sitter. Punjab win by 12 runs! 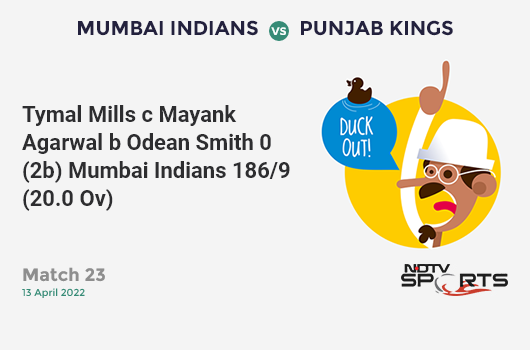 19.5 overs (0 Run) A slower bumper, angling across the batter, from off. Tymal Mills looks to whack it on the leg side but he fails to make any connection.

Tymal Mills walks out at number 10.

19.4 overs (0 Run) OUT! TAKEN! Another one bites the dust! Back of a length, around off. Bumrah throws his bat it. It goes off the outer half of the blade towards the point region. Shikhar Dhawan there takes a simple catch.

19.4 overs (1 Run) Wide! A short ball, angling across the batter, well outside off. Jasprit Bumrah reaches out to cut but he misses. Wided!

Jasprit Bumrah walks out at number 9.

19.3 overs (0 Run) OUT! CAUGHT! Unadkat tries to go for a big one but he holes out! Back of a length, around off. Jaydev Unadkat looks to pull hard but he looks to pull, It goes off the top edge, high in the air towards extra cover. Mayank Agarwal there, backtracks and takes a fine catch. 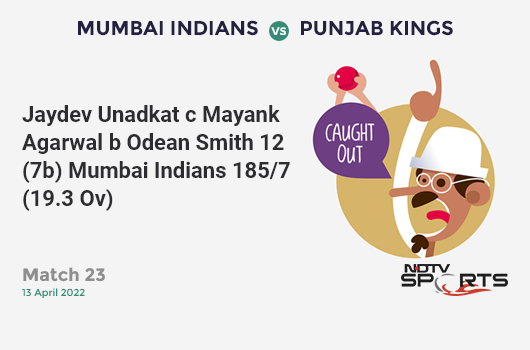 19.2 overs (2 Runs) Smith goes ’round the wicket and serves a full ball, outside off. Jaydev Unadkat drags it back past the bowler towards long off for a brace.

19.1 overs (6 Runs) SIX! BOOM! UNADKAT BELIEVES! A short ball, around middle. Unadkat sits back and pulls it way over the square leg fence for a biggie. 16 runs needed off 5 balls. Can Unadkat do a Tewatia at Pune? 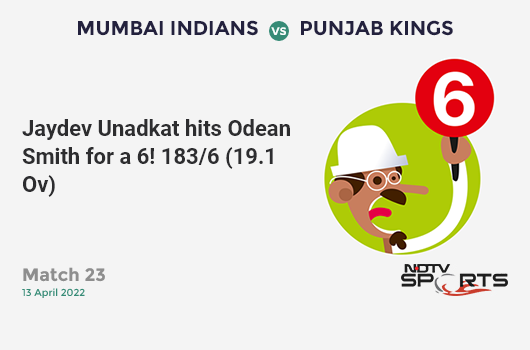 18.6 overs (0 Run) A short ball, well outside off. Ashwin reaches out and looks to cut hard but he fails to get any bat on it. Top over for Punjab, just 6 runs and the wicket of Suryakumar Yadav. 22 runs needed off 6 balls now.

18.5 overs (0 Run) Back of a length, well outside off. Murugan Ashwin drags it back to the bowler.

Murugan Ashwin comes in at number 8.

18.4 overs (0 Run) OUT! CAUGHT! Suryakumar Yadav holes out! That could be it for Mumbai! Rabada serves a full toss, around middle. SKY looks to tonk it over the long on fence. It goes off the toe end of the bat, high in the night sky towards long on. Odean Smith there, settles under it and pouches it with ease. Punjab on top now! 18.2 overs (2 Runs) A full ball, on middle. SKY nudges it towards mid-wicket and comes back for the second run. Excellent running between the wickets.

18.1 overs (4 Runs) FOUR! Easy pickings! Rabada goes for a yorker but misses his mark. It turns out to be a low full toss, around middle. SKY shuffles across and whips it behind square on the leg side for a boundary. 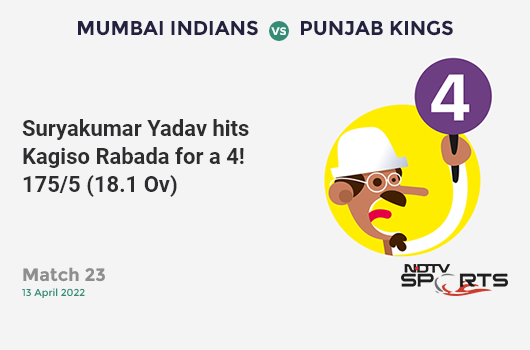 Change. Kagiso Rabada comes into the attack to bowl the penultimate over.

17.6 overs (1 Run) A low full toss, around middle. SKY eases it towards and takes a single. He will retain the strike. 28 runs needed off 12 balls.

17.5 overs (1 Run) A yorker-length ball, around off. Jaydev Unadkat digs it out towards the cover fielder for a run.

17.4 overs (0 Run) A yorker, outside off. Unadkat sits back and looks to slog but he fails to get any blade on it.

17.3 overs (2 Runs) An overpitched ball, well outside off. Unadkat chips it over the cover fielder for a brace. 30 runs needed off 15 balls.

17.2 overs (1 Run) A short ball, around middle. SKY looks to pull but it goes off the top edge towards the fine leg fielder, on the bounce. The batters manage only a single.

17.1 overs (0 Run) A yorker, angling in from middle. Suryakumar Yadav misses his flick and gets hit low on his pad. An appeal from the bowler but that was surely heading down leg.

16.6 overs (1 Run) Good-length delivery, outside off. Suryakumar Yadav pushes it through the off side and collects a single. 33 runs needed off 18 balls.

16.5 overs (6 Runs) SIX! Even better from Suryakumar Yadav! Arora goes for a yorker but he misses his mark and ends up serving a full ball, outside off. SKY slices it over the third man fence and bags another biggie. Brilliant wrist work from the batter. GAME ON! 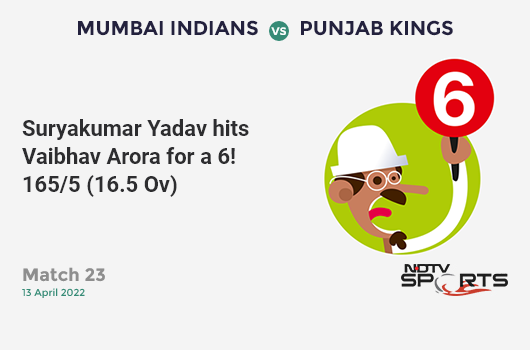 16.4 overs (6 Runs) SIX! WOW! What a shot from Suryakumar Yadav! A full ball, outside off. SKY sits back and lofts it way over the cover fence for a maximum. 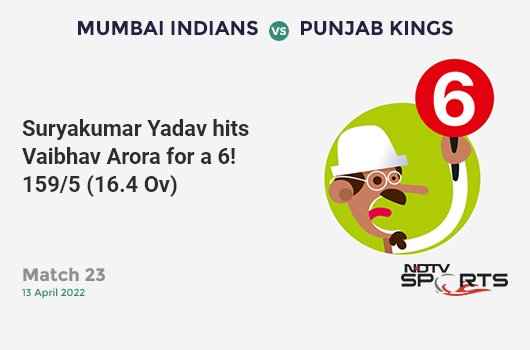 16.3 overs (0 Run) A length ball, outside off. Suryakumar Yadav gets it back to the keeper off the under-edge.

Jaydev Unadkat is the new batter in.

16.1 overs (1 Run) OUT! RUN OUT! A big mix-up and this is a huge wicket in the context of this game. Never run on a misfield they say, but Pollard had some different ideas. Absolute chaos in the middle and Punjab are on top of the game now! This is a full ball, around middle. Pollard digs it out towards long on. Odean Smith there fails to collect the ball cleanly. Pollard and SKY look to steal the second run due to the fumble in the deep. Smith recovers quickly and throws the ball towards the keeper. Jitesh Sharma gathers the ball and whips the bails off. Pollard is well short of his crease and he is a goner! 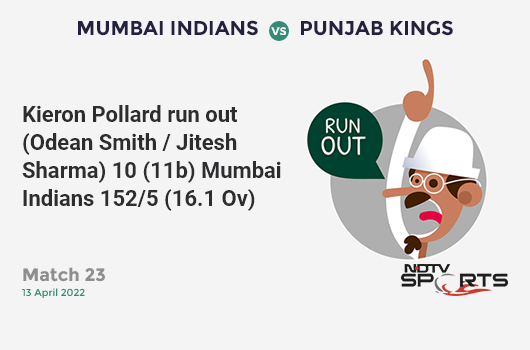 Is that a run out? It does not look good for Kieron Pollard. The umpire takes it upstairs to confirm. The replays confirm Kieron Pollard is way short of the crease.

16.1 overs (1 Run) Wide! A full ball, well outside off. Pollard shuffles across to slog but he misses. The umpire signals wide. The bowler is clearly not happy with umpire’s decision.

15.6 overs (1 Run) A flatter ball, going on with the arm, from off. Pollard stays back and tucks it to the leg side. Just the single. Excellent over from Rahul Chahar, just 4 singles off it.

15.5 overs (1 Run) Tosses it up, outside off. Suryakumar Yadav prods and works it to deep extra cover for a run.

15.4 overs (0 Run) Floated, on a length, around off. Suryakumar Yadav rocks back and punches it towards cover.

15.3 overs (1 Run) Pollards skips down the track and whips it to deep mid-wicket for a single.

15.2 overs (0 Run) An appeal for LBW but turned down! A flat googly, on a length, around middle and turning in sharply. Pollard misses his flick and gets hit on his pad.

15.1 overs (1 Run) Full and around off. Suryakumar Yadav drives it to deep extra cover for a single.