Shreyas Iyer’s Kolkata Knight Riders slipped to 4th place in the points table from 2nd after a comprehensive seven-wicket loss to Sunrisers Hyderabad in Mumbai.

Kolkata Knight Riders were looking to join Gujarat Titans at the top of the IPL 2022 points table but a massive seven-wicket loss to Sunrisers Hyderabad meant that they have slipped from 2nd to 4th place on the Points Table on Friday (April 15). SRH posted their third successive win to join five other teams on 6 points from 5 matches – including KKR.

SRH, however, remain in the 7th spot due to a poor NRR of -0.196 but a win with more than two overs to spare against KKR was a big boost to their run-rate. KKR also have six points but they have played in six matches so far and have a NRR of 0.223. 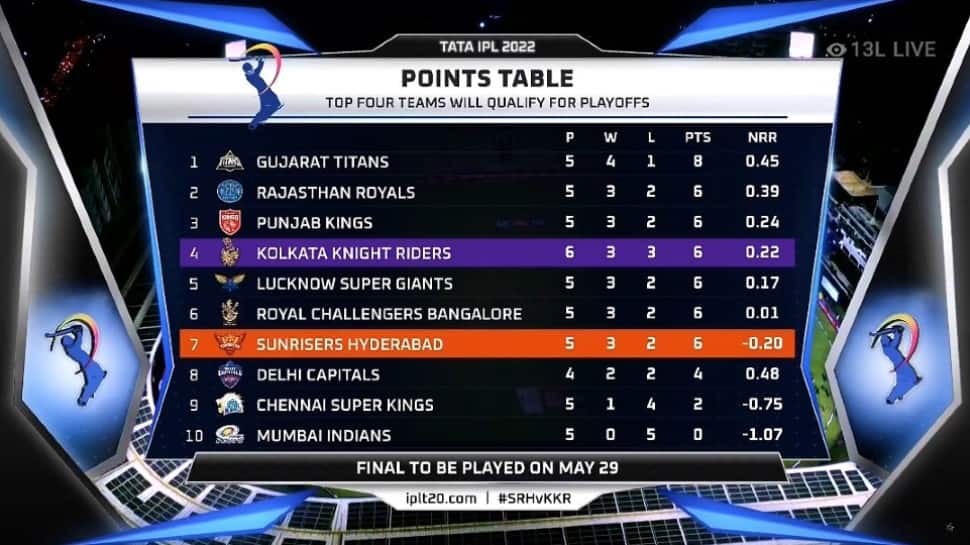 Five-time champions Mumbai Indians are the only side not have won a single game in IPL 2022 so far. They will be facing Lucknow Super Giants on Saturday (April 16) hoping to get their first win of the tournament.

RR opener Jos Buttler continues to lead the run-scoring charts, notching up 272 runs in 5 matches at an average of 68 and strike-rate of 152.8. Buttler smashed 54 off 24 balls against GT with three sixes and eight fours.

GT captain Hardik Pandya rose to 2nd spot in the Orange Cap race with his second successive fifty-plus score in IPL 2022. Hardik top-scored with 87 off 52 balls with 4 sixes and 8 fours to power his team to 192/4 after batting first.

KKR all-rounder Andre Russell moved up to 9th place with his unbeaten 49-run knock against SRH. Russell now has 179 runs in 6 matches at a strike-rate of 179 with one fifty.