With the win against Delhi Capitals, RCB moved up to eighth points from six matches, the same as Gujarat Titans and Lucknow Super Giants but were placed third with a lower net run rate.

Hazlewood bowled with superb control and prised out three middle-order wickets to restrict Delhi Capitals at the Wankhede Stadium in Mumbai. He got good support from Mohammed Siraj (2/31) and Wanindu Hasaranga, who removed the dangerous David Warner (66) as Delhi Capitals could manage only 173/7 in 20 overs, chasing RCB’s 189/5 build on attacking half-centuries by Dinesh Karthik (66 not out) and Glenn Maxwell (55).

With this win, the Royal Challengers moved up to eighth points from six matches, the same as Gujarat Titans and Lucknow Super Giants but were placed third with a lower net run rate.

Earlier on Saturday, Mumbai Indians lost their sixth consecutive match of the IPL 2022 as they were defeated by LSG by 18 runs. With the loss, MI remain at the bottom of the points table. 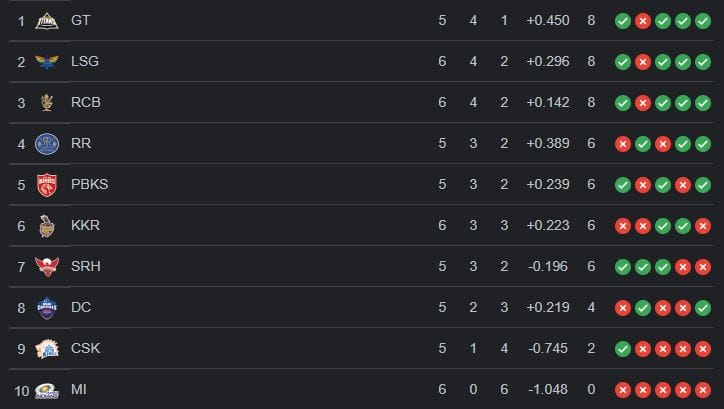 RR opener Jos Buttler continues to lead the run-scoring charts, notching up 272 runs in 5 matches at an average of 68 and strike rate of 152.8. Meanwhile, LSG skipper KL Rahul climbed to the second spot in the tally with an unbeaten century against Mumbai Indians on Saturday. Rahul has so far accumulated 235 runs in the tournament at a strike rate of 144.17.