Right then! That is it from this match. The action continues in the Indian T20 League as Delhi will take on Punjab on 20th April at 7.30 pm (2 pm GMT). But as you all know you can join us early for the build-up. Take care and goodbye!

Faf du Plessis, the skipper of Bangalore wins MAN OF THE MATCH award for his incredible hitting. He says the nature of the ground is such they had to run several couple runs but, in the end, he is glad to play a crucial knock for his side. He is gutted to miss out on the century. Says he had a mental image of coming into this game and change the way he played after a few decent outings in the past game. Further says, he is glad he could rack up enough runs which as well satisfied him a lot. Mentions, the bowlers were on the money. They executed their plans perfectly and it worked in their favour in the end. Mentions, it is going to be a scramble in the top 4. It is out of their control and hopes to improve every game. Adds, you still need one guy who has to anchor the innings, they haven’t been able to do that consistently. Some positives out of it though are Karthik and Ahmed, both are in amazing form.

Stay tuned for the presentation…

Josh Hazlewood is in for a spot interview. He says it was fun. On Faf du Plessis, he says he had some lean phases but today, he took time while wickets were falling but he stayed till the end and did really well. Tells that he is enjoying the conditions and on that wide call against Stoinis, he feels he got lucky there. Mentions they have well-rounded bowling attack and tick all the boxes.

KL Rahul, the captain of Lucknow is in for a chat. He says they started well but they should have done well as they thought, they had conceded 10-20 runs extra on the board. Tells the wicket was sticky but they needed one big partnership in the middle just like Faf du Plessis did for Bangalore. Adds that they should have done better as they put them under the pressure in the Powerplay but they will learn as a team and try and restrict the team to as low as possible.

It was a complete team performance by Bangalore. The bowlers kept picking up wickets at regular intervals. That certainly helped them to get the better of Lucknow in the end. Josh Hazlewood was the star with the ball, and he ended his spell with four wickets. Bangalore have now moved up to the second spot in the points table.

Lucknow were off to a poor start as they lost two wickets inside the Powerplay. Krunal Pandya changed the scenario of the game with the way he was playing the shots but once he fell, the required rate went up the roof, which took the game away from them. Marcus Stoinis and Ayush Badoni tried their best to take it deep but perished under the scoreboard pressure. Jason Holder sent some balls flying over the fence, but it was too little too late.

What a stunning performance by Bangalore. They had the upper hand for the most part of the game and eventually got over the line convincingly. Lucknow failed to build stands in the middle and hardly put any pressure on the bowlers.

19.6 overs (0 Run) Fuller ball, outside off. Bishnoi looks to slog it away but misses. Bangalore win by 18 runs.

Ravi Bishnoi is the new man in.

19.5 overs (0 Run) OUT! TAKEN! Short and on middle. Holder looks to pull but it takes the leading edge and goes to fine leg. Siraj runs forward and slides to his left to take a sharp catch. 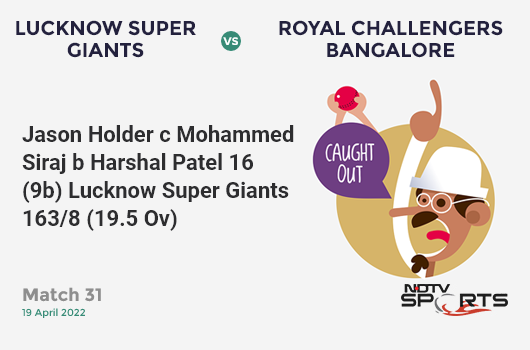 19.4 overs (6 Runs) SIX! Holder can whack it but it is too late! Full and on off. Holder lifts it over deep cover for a maximum. 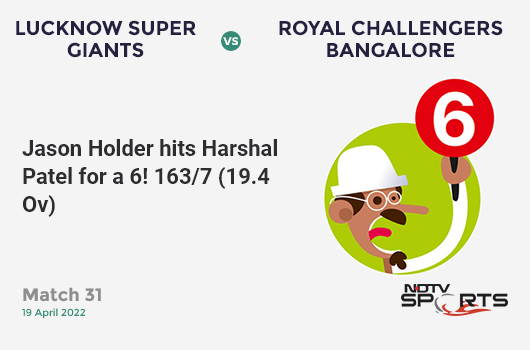 19.3 overs (0 Run) Length and on middle. Holder hits it to deep square leg but does not rotate the strike.

19.2 overs (6 Runs) SIX! A full ball, on middle. Holder heaves it over deep mid-wicket. There is a fielder stationed but it is just over him. A biggie. 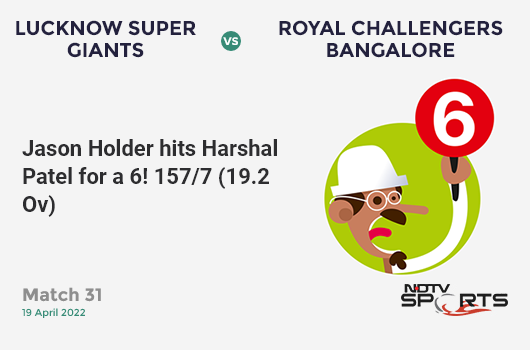 19.1 overs (0 Run) A short ball, on off. Holder walks down the track and looks to pull but misses.

18.6 overs (1 Run) Holder will keep the strike but he needs 31 off the last over! Full ball, outside off, driven to deep point for a single.

18.5 overs (1 Run) Wide! On a length and way outside off. Chameera flashes his bat and misses.

18.4 overs (0 Run) Dot again! Very full and outside off. Chameera fails to connect again. Holder looks for a quick bye but goes back into his crease.

18.3 overs (0 Run) Touch short and outside off. Chameera swings and misses. Holder needs to get on strike now.

Dushmantha Chameera is the new man in.

18.2 overs (0 Run) OUT! BOWLED! Marcus Stoinis is livid himself, literally fuming as he walks back. This is full and outside off. Stoinis shuffles again to the off side and looks to whip it away but gets an inside edge and the ball ricochets onto the stumps. 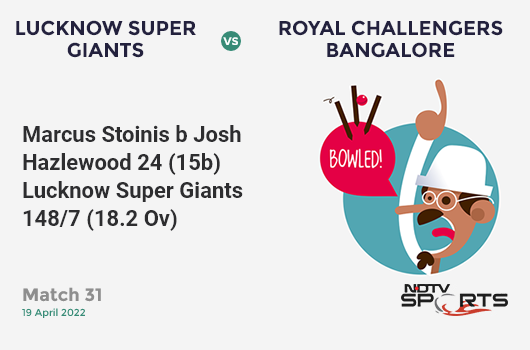 18.1 overs (0 Run) A length ball, outside off. Stoinis shuffles across and sees the ball over the tramline and leaves it.

17.6 overs (1 Run) Length ball, outside off. Stoinis slaps it straight back to Patel who fails to stop and a single is taken. 34 needed in 12 balls.

17.5 overs (4 Runs) FOUR! This is short and outside off. Stoinis looks to ramp it away but mistimes it but does enough to clear the keeper for a boundary. 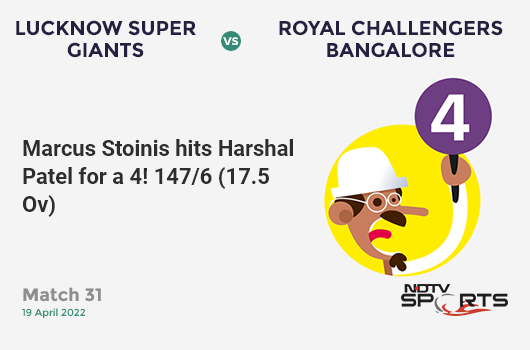 17.4 overs (1 Run) A friendly full toss but Holder cannot take any advantage of it. On middle, Holder miscues his shot on the leg side and will take a single.

17.3 overs (1 Run) Singles won’t do for Lucknow! Fuller, slower and on middle, pushed to covers for a single.

17.2 overs (1 Run) Patel keeps bowling around off. Holder tickles it to square leg for one.

17.1 overs (1 Run) A slower length ball, on middle. Stoinis hits it to mid-wicket and gets a single.

16.6 overs (1 Run) Short of a length and angling on middle. Stoinis stands tall and nudges it to mid-wicket for a single.

16.5 overs (1 Run) Wide! Way outside off. Holder takes a step to the off side and looks to cut but misses.

Jason Holder walks out at number 8.

16.4 overs (0 Run) OUT! CAUGHT BEHIND! Josh Hazlewood strikes again! A full ball, outside off. Badoni shuffles across and looks to slog-sweep it but gets a faint edge and Dinesh Karthik, the keeper takes it.

16.3 overs (2 Runs) Length ball, outside off. Badoni cuts it had to deep point for a brace.

16.1 overs (4 Runs) FOUR! Perfect start to the over! A length ball, outside off. Stoinis shuffles across and pulls it to deep mid-wicket for a boundary. 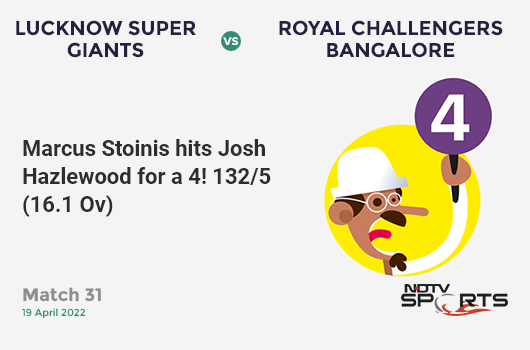 Strategic break! Bangalore have sent 5 Lucknow players back to the hut. It won’t be long before they see tail-enders come at the crease. They would aim to take a couple of quick wickets and put the opposition on the back foot. Lucknow have their new star, Ayush Badoni and an experienced Marcus Stoinis at the crease, both have the ability to take on bowlers. It will be interesting to see who will come out on top. Josh Hazlewood comes back into the attack for Bangalore.

15.6 overs (1 Run) Around leg, drilled down to long on for a single to end the over. Wanindu Hasaranga spills more than 10 runs, just what Lucknow needed.

15.5 overs (6 Runs) SIX! Powered! Short and on off. Stoinis clears his front leg and pulls it over long on for a biggie. 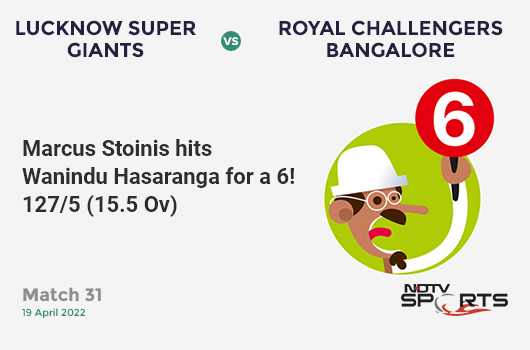 15.3 overs (1 Run) Shorter and down the leg side. Stoinis pulls it to short fine leg for a sharp single.

15.2 overs (1 Run) Leg bye! This is full and around off. Badoni comes down the track and looks to defend but misses and gets hit on the pads. It rolls to the off side for a leg bye.

15.1 overs (1 Run) Short and angling on leg. Stoinis works it to mid-wicket for a single.