Home Watch: On This Day, Sachin Tendulkar Unleashed The “Desert Storm” On Australian Bowling Attack In Sharjah In 1998

Watch: On This Day, Sachin Tendulkar Unleashed The “Desert Storm” On Australian Bowling Attack In Sharjah In 1998 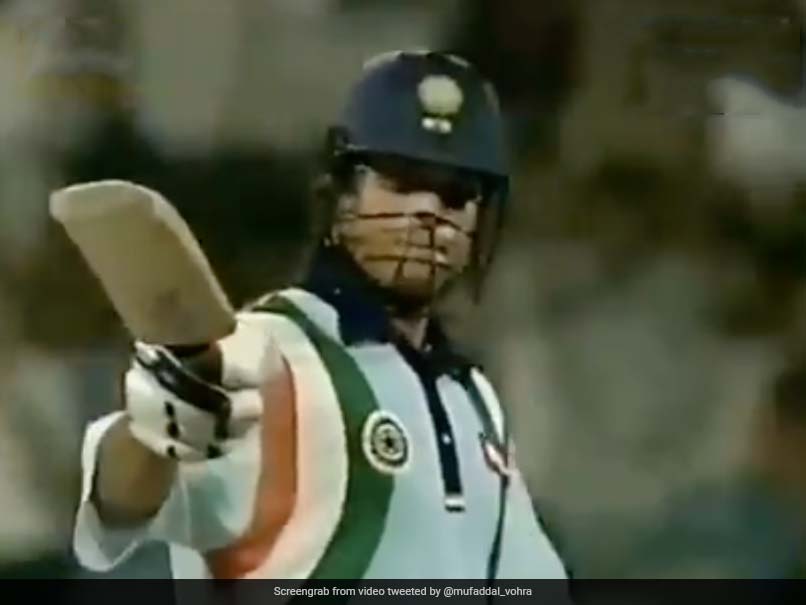 Sachin Tendulkar played one of the finest ODI innings of all times vs Australia at Sharjah in 1998.© Twitter

On this day in 1998, legendary Indian batter Sachin Tendulkar played one of the finest One Day International (ODI) innings of all times against Australia at Sharjah, unleashing what is known as the ‘Desert Storm’ to the millions, on the lethal Aussie bowling attack comprising of likes of Shane Warne, Michael Kasprowicz, and Damien Fleming. “Desert storm in Sharjah! On this day in 1998, the world witnessed one of Sachin Tendulkar’s greatest innings as he smashed an incredible 143 against Australia,” tweeted ICC.

The match was played as a part of the Coca-Cola Cup, a triangular series between India, Australia, and New Zealand.

The match was extremely important for India, as it could use a victory to seal their position as Australia’s opponents in the final.

In case of a loss, the net run rate could have ruined the Men in Blue’s chances at gaining the trophy.

Electing to bat first, Australians put up an intimidating 284 for 7 in their 50 overs. Aussies did not get off the best of the start as they lost Adam Gilchrist for 11 at a score of 17 to medium-pacer Harvinder Singh.

Future captain Ricky Ponting and Mark Waugh carried on with the rebuilding efforts, with Ponting falling for 31 to the Indian spin great Harbhajan Singh in the 14th over at the score of 84 and Mark Waugh scoring a well-made 81 before falling to Tendulkar with an assist from Ganguly’s hands in the 32nd over of the game at the score of 177 as the fourth wicket.

Michael Bevan, the finisher for Australia took the innings to the next level, scoring an unbeaten 101, consisting of 9 fours, with support from Darren Lehmann (26), powering Australia to 284 for 7 in 50 overs.

Venkatesh Prasad emerged as the pick of the bowlers for India, with 2/41 in eight overs. Harvinder Singh, Anil Kumble, Harbhajan Singh and Sachin Tendulkar managed one wicket each.

Chasing 285, India lost Saurav Ganguly for 17 at the score of 38 in the ninth over of the game. Sachin Tendulkar and wicket-keeper batter Nayan Mongia stabilised the innings before Mongia fell for 35 in the 22nd over of the game when the score was 107. Tendulkar looked in good touch, going after everyone in Australia’s bowling attack one by one. A sandstorm disrupted India’s efforts for around 25 minutes, with the target being revised to 276 in 46 overs.

But if the sandstorm had disrupted the game, Sachin had unleashed a storm of his own that threatened to sweep away Australia’s chances at the match.

No one was spared. Michael Kasprowicz was hit for sixes that still live in the minds of millions, 24 years later.

The match also marked one of the many face-offs the Master had with late legendary leg-spinner Shane Warne, with the batter getting better of Warne on this particular day.

Tendulkar looked unstoppable, with India 242/4 in 42.5 overs, with just 34 required in 19 deliveries and a victory was in sight for India.

A miracle followed as pacer Damien Fleming got Tendulkar at the final ball of the over, taking the scoreline to 242/5 in 43. with India needing 34 in 18 balls. Tendulkar went back to the pavilion scoring a 131-ball 143, with 9 fours and 5 sixes.

But the rest of the Indian batters, Ajay Jadeja (1), VVS Laxman (23*), Hrishikesh Kanitkar (5*) could not carry the momentum Tendulkar had given to his side, accumulating only 8 off next three overs, finishing at 250/5 in 46 overs, which meant a 26-run loss.

Tendulkar, immortalised as a deity by millions of his fans, indeed worked in a mysterious way and had the last laugh that day.

If Australia could sweep the points table with four successive wins, even India got their chance to fight the mighty Aussies for the Coca-Cola Trophy as his 143 off 131 boosted India’s net run rate, giving them an edge over the Kiwis, as New Zealand is known.

An uptick in net-run rate gave India a place in the finals of the competition.

The final took place on 24th April, Tendulkar’s 25th birthday. The match saw Australia making 272/9 in their 50 overs. Another Tendulkar Special followed on his birthday, as his 134 off 131 deliveries helped India chase down the target in 48.3 overs and get their hands on the Coca-Cola Cup.

This ‘storm’ of 22nd April 1998 was immortalised as the ‘Desert Storm’ to millions who turned on their television sets to watch one of the world’s best batters bat at peak of his powers.

The commentary that followed Sachin’s shots is just as immortalised as his efforts on this day and still rings through the ears of fans. Innings like these turned Tendulkar, a kid from Mumbai, into an epitome of hope.

Millions of televisions sets would switch on when Tendulkar walked out to bat and switched off when he was dismissed before taking India to the victory.

The prodigious batter carried hopes of billions on his baggage, earning the ultimate record for his efforts in 2011, when India lifted the 50-over Cricket World Cup after 28 overs, beating Sri Lanka in the finals.