First it was Covid, then riots and now floods: KwaZulu-Natal (NZN) province, South Africa’s gateway to the Indian Ocean, is reeling from a unpredented string of disasters.

Here is factfile on the region:

KZN employs 2.4 million out of 14.5 million workers in South Africa’s formal economy and accounts for more than a sixth of national GDP.

It is the second-largest GDP contributor after the economic hub of Gauteng which houses Johannesburg, according to global auditors PwC.

The port of Durban is the country’s biggest trade platform for the agricultural, automotive and mining sectors.

Durban is the largest and busiest harbour in South Africa, handling over 60 percent of its container traffic, says PwC senior economist Christie Viljoen.

Estimates of the cost of the floods that struck KZN this month, fuelled by record-breaking rains, are sketchy.

Many flooded areas remain inaccessible due to road damage.

Most of the region’s 1,150 businesses are located on a flood plain and were badly battered.

But these “operational losses” do not include the cost of fixing roads, railway lines, bridges, power line, water pipes and sewerage, or damage to homes — a bill that will be many billions of rand.

Economists and business leaders say the floods could have a potentially crippling impact on growth in 2022.

“The city will take about three months to get back to where it was to pre-flood levels and it should reduce the city’s annual GDP by about 1.8 percent,” said Ajiv Maharaj, a senior official in charge of local economic development.

Experts say damage to businesses and the port of Durban, adding to the impact on the supply chain from the Ukraine war, will dampen exports.

Durban Chamber of Commerce and Industry CEO Palesa Phili said road freight between Durban and Gauteng was currently at half of normal levels.

“Export shipments and revenues will be under pressure in the short term,” said Viljoen.

“Damaged goods in warehouses and at ports cannot necessarily be replaced and will result in weaker export revenues.”

Its automotive industry is also a big employer.

Toyota has temporarily suspended operations at its Durban plant, warning of delays in delivering popular models such as the Hilux pickup — or “bakkie,” as these trucks are dubbed here.

The province is a key farming region, known chiefly for its sugarcane fields in the Tongaat region.

Agriculture Minister Thoko Didiza has estimated losses in the agriculture sector to be more than 500 million rand ($32 million).

Around half of those losses will be incurred by cane farmers, although no shortages of sugar are expected.

Durban is a leading tourism destination, favoured for its warm subtropical climate, idyllic beaches and nearby wildlife sanctuaries.

The region had been hoping for a rebound from the Covid-19 pandemic for the upcoming northern hemisphere summer, but is now bracing for cancellations from both local and international travellers.

A crucial test will come next month when Durban stages an annual trade conference — the Africa Travel Indaba, for which 6,000 people had been expected.

“The show is going ahead as we had planned,” said Themba Khumalo, head of SA Tourism.

“In times of crisis such as this, it is not time to lean back… it’s time for us to show our economic support for Durban,” he said. 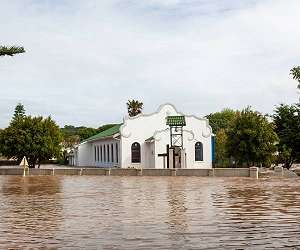 Inanda, a rural township 30 kilometres (19 miles) from the city of Durban’s central business district, was one of the areas devastated by heavy flooding that has killed 443 people and left more than 40,000 homeless.

On Sunday, around 200 Christian worshippers gathered at the United Congregational Church of Southern Af … read more