This was Delhi Capitals’ fourth defeat in seven matches and they are now in sixth place in the IPL points table. Rajasthan Royals have won their fifth match out of seven and they have now gone to the top of the IPL 2022 points table.

A clinical bowling performance — after Jos Buttler blasted an unbeaten 65-ball 116 — helped Rajasthan Royals defend a score of 222/2 against Delhi capitals to register a 15-run victory in Match 34 of the IPL 2022, at the Wankhede Stadium in Mumbai on Friday.

Prasidh Krishna finished with 3/22 while R Ashwin ended with 2/32 as Royals weathered some anxious moments as they defended their big total to register their fifth win of the season and move to the top of the points table with 10 points, overtaking Gujarat Titans and Royal Challengers Bangalore on higher net run rate.

On the other hand, this was Delhi Capitals’ fourth defeat in seven matches and they are now in sixth place in the IPL points table. 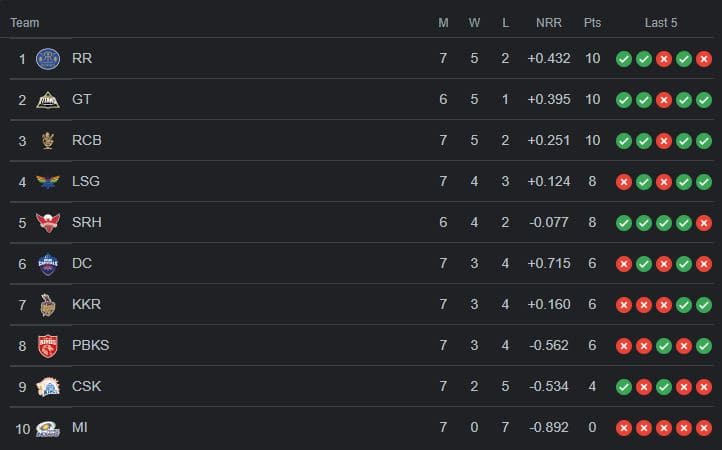 Rajasthan Royals opener Jos Buttler continued his rich form as he smashed his third century of the IPL 2022 against DC. He continues to hold on to the IPL 2022 Orange Cap with 491 runs in 7 matches so far with three hundreds and two fifties. Lucknow Super Giants skipper KL Rahul and DC opener Prithvi Shaw are in second and third position respectively.

The Purple Cap currently belongs to Yuzvendra Chahal, who has picked up 18 wickets from 7 matches so far.

Delhi Capitals chinaman bowler Kuldeep Yadav continues to be in 2nd place with 13 wickets so far.

Home / Opinion / Views /  India ought to have started the…

(Bloomberg) — An Indian city with a strong environmental record is planning…