Albedo is a term that represents the ability of Earth’s surface to reflect solar radiation. This is the primary factor of the energy balance between the surface and the atmosphere. When snow falls, albedo changes quickly, as snow is able to reflect most wavelengths of light back into the atmosphere. Naturally, albedo fluctuates often during winter and spring in the Tibetan Plateau, which has a great impact on the surface energy balance and water cycle.

However, modern weather and climate models that focus on land surfaces have struggled to parametrize albedo, or represent albedo effects as a computer algorithm. Locations that have frequent snow cover fluctuations, like the Tibetan Plateau, often have larger model simulation error than regions that do not experience snowfall and rapid melting.

Satellites continue to provide new data and derived products that provide a better picture of Earth’s radiation budget. With recent improvements to satellite-retrieved albedo data, corresponding author Prof. Yaoming Ma and a group of researchers from the Institute of Tibetan Plateau Research, Chinese Academy of Sciences used satellite spectral albedo data as well as ground observed and simulated snow depth data to develop a scheme that optimizes albedo parameters at the local level using the Noah land surface model. They just published their findings in Advances in Atmospheric Sciences .

This study breaks through the limitations of the Noah model’s default albedo scheme and provides a reference for improving its physical meteorological parameterization schemes by using remote sensing products, such as satellite data.

Prof. Massimo Menenti with the Aerospace Information Research Institute of Chinese Academy of Sciences, also a coauthor of the study, added, “The scheme combines the best of two worlds. On the one hand the capability of the model to compute, albeit with moderate accuracy, daily snow depth, which is a driver of snow albedo, and daily snow cover, which can be used to determine snow age, another driver of snow albedo. On the other hand, satellite observations provide accurate measurements of snow albedo, so that the parameterization we propose can provide accurate estimates, even though the model estimates of snow albedo and age might not be very accurate.”

The above research was supported by the Strategic Priority Research Program of Chinese Academy of Sciences, the Second Tibetan Plateau Scientific Expedition and Research program, and the National Natural Science Foundation of China. Dr. Lian Liu is the first author and Prof. Ma is the corresponding author.

Research Report:Improved Parameterization of Snow Albedo in WRF + Noah: Methodology Based on a Severe Snow Event on the Tibetan Plateau 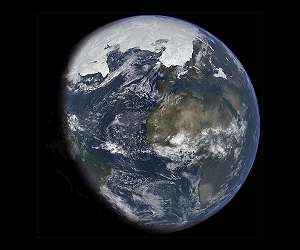 
Large jumps within the last ice age between cold and warm climate periods in the Northern Hemisphere may have occurred because the climate system became unstable when atmospheric CO2 levels were between approximately 190 and 225 parts per million. That is the conclusion from a study, published in Nature Geoscience by Guido Vettoretti et al. at the Niels Bohr Institute (NBI), University of Copenhagen, Denmark.