India is currently facing a prolonged heatwave, with temperatures exceeding 42 C in numerous cities across the country. This comes just weeks after India recorded its hottest March since the country’s meteorological department began its records over 120 years ago. This image, produced using data from the Copernicus Sentinel-3 mission, shows the land surface temperature across most of the nation.

According to the India Meteorological Department, maximum air temperatures reached 43-46 C over most parts of Rajasthan, Vidarbha, Madhya Pradesh and East Uttar Pradesh; in many parts over Gujarat, interior Odisha; and in some parts of Madhya Maharashtra on 28 April. Forecasters warned that heatwave conditions are expected to continue until 2 May.

Experts at the Indian Institute of Technology’s Water and Climate Lab stated that, in recent years, the number of Indian states hit by heatwaves has increased, as extreme temperatures become more frequent.

The map was generated by using the mission’s Sea and Land Surface Temperature Radiometer instrument. While weather forecasts use predicted air temperatures, this satellite instrument measures the real amount of energy radiating from Earth. Therefore, the map shows the actual temperature of the land’s surface pictured here, which is usually significantly hotter than air temperatures.

Sentinel-3 can monitor wildfires, map the way the land is used, provide indices of vegetation state, as well as measure the temperature, colour and height of the sea surface. 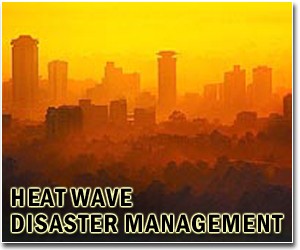 
Deaths related to increased temperatures are expected to rise in Britain as global warming rates increase, according to a new study.
A new paper published in the journal Environmental Research Letters concludes that deaths in England and Wales will increase from 117 deaths per day to 166 deaths per day during the 10 hottest days of the year if global warming rates surpass 2 degrees Celsius.
Current global warming levels of 1.21 degrees Celsius have led to a slight decrease in winter deat … read more