“ISRO successfully completed the static test of a human-rated solid rocket booster (HS200) for the Gaganyaan Programme at Satish Dhawan Space Centre (SDSC), Sriharikota, Andhra Pradesh on May 13, 2022, at 7:20 AM local time,” the space agency tweeted.

The booster engine is part of the Geosynchronous Satellite Launch Vehicle MkIII (GSLV Mk III) rocket that would carry Indian astronauts to space.

The test was conducted at the Satish Dhawan Space Centre (SDSC) in Sriharikota, Andhra Pradesh, it is learnt.

The 135 seconds test firing of the booster ‘HS200’ happened in the morning and is part of the human rating process of the rocket GSLV Mk III.

The GSLV MK III rocket is a three staged vehicle.

The first stage is powered by solid fuel, the second by liquid fuel and the third is cryogenic stage powered by liquid hydrogen and liquid oxygen. 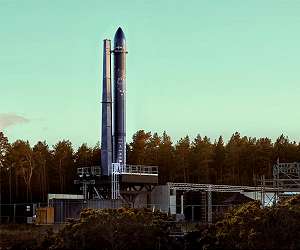 
Orbex has unveiled the first full-scale prototype of the Prime orbital space rocket on its dedicated launch pad publicly for the first time.

The unveiling of the first of a new generation of European launch vehicles – designed to launch a new category of very small satellites to orbit – represents a major step forward for the British rocket company as it prepares for the first ever vertical rocket launch to orbit from UK soil. Orbex’s Prime rocket is the first ‘micro-launcher’ developed in Europe … read more