Ahead of IND vs ENG 2nd ODI, MS Dhoni, Rishabh Pant go on a party with Parthiv Patel, check PIC

IND vs ENG 2nd ODI: Former Indian captain MS Dhoni is enjoying his vacation in England. He clearly loves the country which he discovered first thanks to cricket. Dhoni has visited England many times to play cricket but this time is it different. The Chennai Super Kings captain went to London to celebrate his 41st birthday. He threw a big bash in which most of Indian cricket team members were invited. The timing of his trip to England is such that it is co-inciding with India’s tour of England. Dhoni was also seen attending the last T20 vs England, which they lost by 17 runs.

Dhoni’s pics from his London vacation goes viral on internet on a daily basis these days. The popularity of these pics have a lot to do with MSD’s long absence from social media. He has accounts on all social media platforms but rarely posts anything. The distance that he createst with his fans end up getting more following.

On Wednesday, a rare picture emerged on social media and Dhoni fans can thank former Indian wicketkeeper Parthiv Patel for the same. Parthiv put an Instagram story in which he can be seen posing with current Indian wicketkeeper and batter Rishabh Pant and Dhoni. Parthiv is in the centre while Dhoni and Pant are by his side.

Check out the pic here. 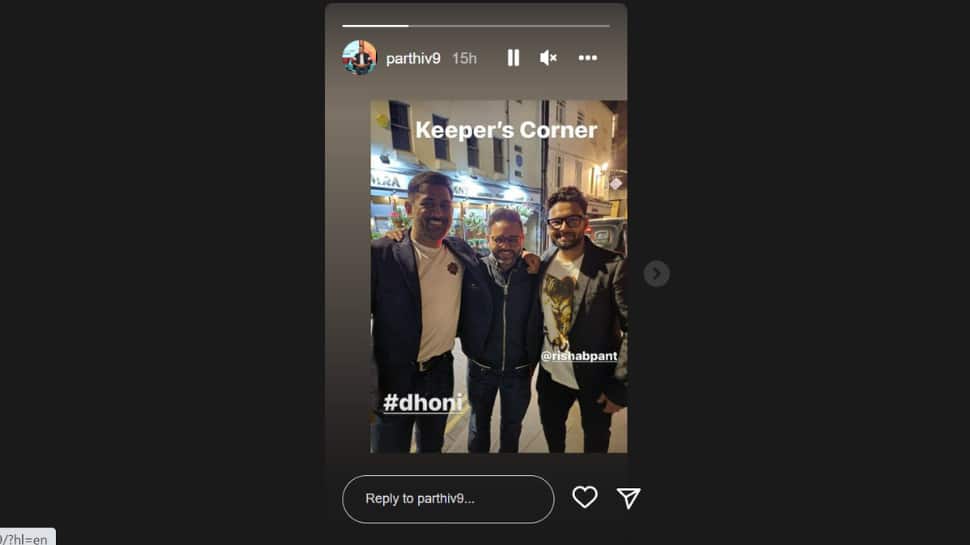 Looking at the pic, one understands that the trio went on a dinner together. Dhoni has been happily posing and smiling in these pics.

Pant, on the other hand, has a job in hand. India will aim to win the 2nd ODI vs England at Lord’s on July 14. India are 1-0 ahead in the series with a dominant win in the first match. Bowling first, India bundled out England for a mere 110 before Rohit Sharma smashed a quickfire fifty to take the side home with 10 wickets in hand. Not to forget, the hero of the match Jasprit Bumrah, who recorded career best figure to finish with 6 wickets.