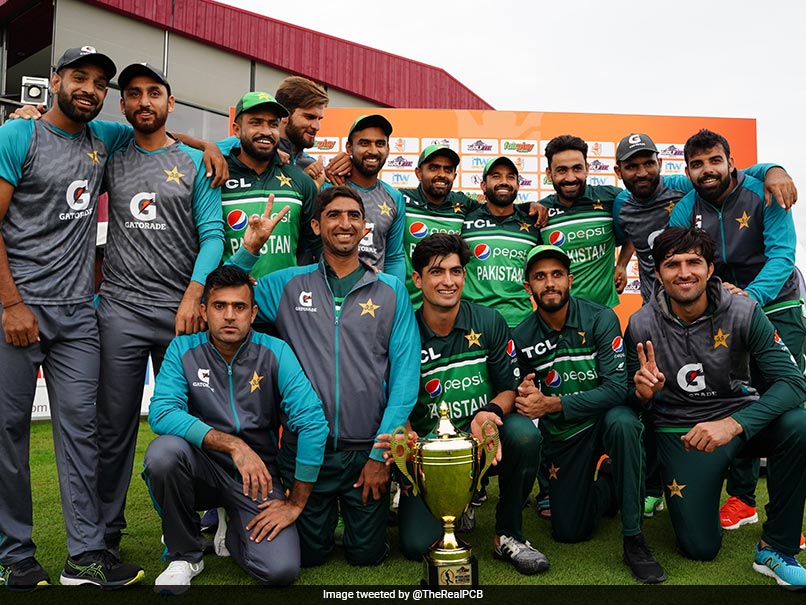 Pakistan players pose with the trophy after sealing the ODI series 3-0 against Netherlands.© Twitter

Captain Babar Azam and fast bowler Naseem Shah starred as Pakistan edged the Netherlands by just nine runs in the third and final one-day international in Rotterdam on Sunday. The Netherlands were all out for 197 in the last over in which they had needed 14 runs for a first-ever victory over Pakistan. Tight bowling had restricted Pakistan to 206 all out with captain Azam top scoring with 91. In reply, Tom Cooper (62) and Vikramjit Singh (50) top scored for the Dutch but teenage fast bowler Shah, with 5-33, proved key as Pakistan swept the series 3-0.

Pakistan won the toss and elected to bat on a cool and slightly overcast day on a sticky wicket which at times troubled both the Dutch and Pakistani batsmen.

Dutch paceman Vivian Kingma struck early when he sent the bails flying with his first ball in the second over, dismissing opener Abdullah Shafique.

Wickets continued to fall as Pakistan edged to 150-5 by the 40th over.

Up-and-coming Dutch youngster Aryan Dutt took the crucial wicket of Azam — the world’s top-ranked ODI batsman — when the Pakistan captain was on 91 and seemed set for his 18th ODI century.

Azam pushed the ball into the air with Dutt diving and taking a brilliant one-handed catch for his 10th one-day international wicket.

Azam, together with dangerman Fakhar Zaman (26), put on a 55-run partnership which proved crucial in the end.

The lower order steered the Netherlands within reach of a famous victory, but last man Dutt fell to a full-toss, bowled by Mohammad Wasim, who took 4-36, in the final over.

Pakistan’s big breakthrough came when they removed Cooper for 62 in the 46th over.

Cooper, going for a big hit to try and ease the pressure, got a leading edge, sending the ball high into the air, taken brilliantly by Zaman who had to run a long way from deep midwicket for a diving catch.

Teja Nidamanuru hit a plucky 24 off 32 balls before Shah claimed his scalp with a ball that nipped back, hitting the top of his middle stump.