A Chinese research vessel accused by India and the United States of spying activities left Sri Lanka’s Chinese-run port of Hambantota on Monday after a week-long stay.

Colombo allowed the Yuan Wang 5 to visit the deep-sea port on the condition that it would not engage in research in Sri Lankan waters.

Both India and the US had raised security concerns over the ship’s visit to Sri Lanka, with New Delhi lodging a complaint — a move that delayed the visit by a week before Colombo announced a U-turn.

“Our pilot is onboard and the ship is leaving port,” a harbour official told AFP as the vessel was being guided out by tug boats.

“They have given the port of Jiangyin as their next destination.”

The vessel said to be carrying about 400 crew had set off from Jiangyin, in China’s Jiangsu province, in mid July.

Shipping analytics websites describe the Yuan Wang 5 as a research and survey vessel, but according to Indian media it is a dual-use spy ship.

When the vessel arrived last week, Chinese ambassador to Sri Lanka Qi Zhenhong said the port call was part of “normal exchanges between the two countries”.

There was no send-off ceremony at the Hambantota port, which has been run since 2017 by a Chinese state-owned company that took out a 99-year lease on it for $1.12 billion, less than the $1.4 billion Sri Lanka paid a Chinese firm to build it.

New Delhi is suspicious of Beijing’s increasing presence in the Indian Ocean and activities in Sri Lanka, seeing both as firmly within its sphere of influence. 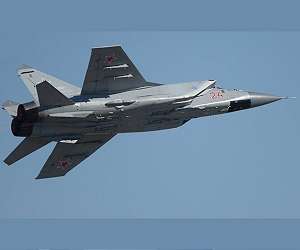 “Two Russian MIG-31 fighters are suspected of having violated Finnish airspace in the Gulf of Finland off Porvoo,” the ministry said in a statement.

The Finnish Air Force sent up “an operational flight mission” to identify the aircraft, it said, adding that the Finnish Border Guard had started “a … read more