Animal rights activists on Friday cheered a move by a shipping giant to alter course in Sri Lankan waters to avoid collisions with blue whales, the world’s largest mammals.

The island’s southern coast has an unusually high density of blue whales, classed as endangered on the IUCN Red List of Threatened Species, and is one of the world’s busiest international shipping lanes.

Campaigners believe more than a dozen of the gigantic animals — the largest ever to have lived on Earth at up to 30 metres long and 150 tonnes — have been killed in collisions with commercial ships in the last decade.

There have also been occasional reports of fishermen dying when their boats were run down by container ships in the area, a rich fishing ground.

The Geneva-based Mediterranean Shipping Company (MSC), one of the world’s biggest container carriers, announced Thursday that it had voluntarily adjusted its routes around Sri Lanka by that distance to reduce the risk of accidents involving whales, dolphins and porpoises.

The move could reduce the strike risk as much as 95 percent, the company said.

It is also ordering its smaller feeder vessels in the area to slow to 10 knots in blue whale habitats.

The International Fund for Animal Welfare welcomed the announcement, calling it “good news for both blue whales and for people”.

The presence of the mammals has spawned a lucrative tourist whale-watching industry.

“This rich food web results in an area which is optimal for fishing,” Wijeratne said. “Not surprisingly whales also gather in this area.”

Any move to improve the safety of fishermen and shipping will automatically have a positive impact on whales and whale watching, he added.

“We should be embarrassed that we failed, but an international shipping company had to take the initiative,” he said. 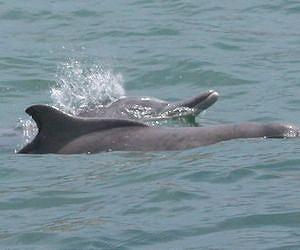 Living together: how two different species of dolphins coexist in Australia


New research by Flinders University scientists sheds new light on the reasons why two species of dolphins coexist in the northern Australian waters.