A huge green and purple communications tower in Sri Lanka financed with Chinese debt that has become a symbol of the ousted Rajapaksa clan’s closeness to Beijing will finally open this week, its operator said Monday.

The 350-metre (1,155-feet) Lotus Tower — visible from all over Colombo and built for an estimated $113 million — has been plagued by corruption claims since construction began in 2012 under former president Mahinda Rajapaksa.

It is one of several “white elephant” projects built with Chinese loans under Rajapaksa, elder brother of Gotabaya Rajapaksa who was ousted from the presidency in July after months of protests over Sri Lanka’s dire economic crisis.

The state-owned Colombo Lotus Tower Management Company said they had decided to open its observation deck to visitors from Thursday and earn ticket sales to minimise losses.

“We can’t keep this closed. The maintenance costs are huge,” chief executive Prasad Samarasinghe told reporters. “We want to earn the upkeep of the building and turn this into an entertainment centre.”

The company hopes to rent out office and shop space, including a revolving restaurant just below the observation deck offering views of the congested capital as well as the Indian Ocean.

Broadcasters say the structure, which cannot cover the island nor improve current transmissions from a mountain in the centre of Sri Lanka, is of no use as a communications tower.

A local media outlet on Monday called it a “towering story of pride and waste,” a vanity project of Rajapaksa who wanted a copy of Beijing’s 405-metre Central Radio and TV tower.

During his decade in power from 2005-15, Mahinda Rajapaksa borrowed heavily from China for infrastructure projects which failed including a deep-sea port handed to Beijing in 2017 on a 99-year lease.

Sri Lanka’s current economic crisis is partly blamed on Chinese debt which accounts for over 10 percent of Colombo’s $51 billion in external borrowings.

Sri Lanka defaulted on its debt in April and earlier this month agreed to a conditional bailout of $2.9 billion from the International Monetary Fund.

It depends on the Sri Lankan government striking a deal with creditors including China to restructure its borrowings.

Beijing has so far only offered additional loans instead of taking a cut on outstanding borrowings.

China has loaned billions for infrastructure projects in Asia, Africa and Europe under its gargantuan Belt and Road Initiative, which critics say is saddling nations with debt. 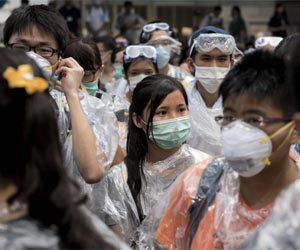 
Hong Kong jailed five speech therapists for sedition on Saturday over a series of illustrated children’s books that portrayed the city’s democracy supporters as sheep defending their village from wolves.

They join a growing list of residents jailed under a colonial-era sedition offence which authorities have deployed alongside a national security law introduced by Beijing in 2020 to stamp out dissent.

The group, who are all in their twenties and belonged to a speech therapists’ union, have been … read more