China, India call for negotiated way out of Ukraine war

China and India on Saturday called at the United Nations for a negotiated end to the Ukraine war, stopping short of robust support for traditional ally Russia.

After a week of pressure at the United Nations General Assembly, Russia’s foreign minister took the General Assembly rostrum to deliver a fiery rebuke to Western nations for what he termed a “grotesque” campaign against Russians.

But no major nation has rallied behind Russia, including China, which just days before the February invasion of Ukraine had vowed an “unbreakable” bond with President Vladimir Putin.

Chinese Foreign Minister Wang Yi called on both Russia and Ukraine to “keep the crisis from spilling over” and from affecting developing countries.

“China supports all efforts conducive to the peaceful resolution of the Ukraine crisis. The pressing priority is to facilitate talks for peace,” Wang said.

“The fundamental solution is to address the legitimate security concerns of all parties and build a balanced, effective and sustainable security architecture.”

During his visit to the United Nations, Wang met with Ukrainian Foreign Minister Dmytro Kuleba, in their first talks since the war began.

Earlier this month Putin acknowledged Chinese “concerns” about Ukraine during a meeting with his counterpart Xi Jinping.

US officials have been heartened by what they see as China’s lack of concrete backing for the war and say that Beijing has declined requests to send military equipment, forcing Russia to rely on North Korea and Iran as its own supplies dwindle.

China’s reaction to Russia is being closely watched for clues on its approach to Taiwan, a self-governing democracy that Beijing claims as its territory.

Wang held firm that China would take “forceful steps” against any interference, insisting that efforts to prevent “reunification” with Taiwan would be “crushed by the wheels of history.”

India, unlike China, has a warm relationship with the United States but it has historic ties with Russia, its traditional defense supplier.

“As the Ukraine conflict continues to rage, we are often asked whose side we are on,” said India’s foreign minister, Subrahmanyam Jaishankar.

“Our answer, each time, is straight and honest — India is on the side of peace and will remain firmly there,” he said.

“We are on the side that calls for dialogue and diplomacy as the only way out.”

Russian Foreign Minister Sergei Lavrov at a news conference declined to answer whether there has been any pressure from China. In his speech, he sought to cast blame squarely on the West.

“The official Russophobia in the West is unprecedented. Now the scope is grotesque,” Lavrov told the General Assembly.

“They are not shying away from declaring the intent to inflict not only military defeat on our country but also to destroy and fracture Russia.”

The United States, he said, since the end of the Cold War has acted as if it is “an envoy of God on Earth, with the sacred right to act with impunity wherever and whenever they want,” Lavrov said.

He also blasted the European Union as an “authoritarian, harsh, dictatorial entity” and said the bloc’s leadership forced one member state’s leader — Cyprus President Nicos Anastasiades — to cancel a planned meeting with him.

Lavrov criticized the West for not engaging with Russia, saying, “we have never stepped away from maintaining contact.”

Western powers are looking at further sanctions after Putin called up reservists and made a veiled threat to use nuclear weapons, and have vowed not to recognize results of referendums on Russian annexation being held in occupied territories.

They have welcomed Lavrov’s isolation, noting how he only showed up at a Security Council session on Thursday to deliver remarks and not to listen to others.

The junta has welcomed Russia’s Wagner Group security firm, despite Western allegations of rights abuses, as France pulled out troops who had been struggling to contain a jihadist insurgency. 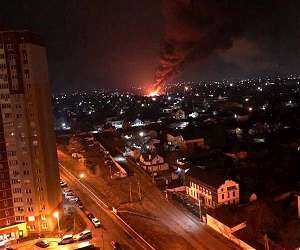 
China called Wednesday for a “ceasefire through dialogue” and for all countries’ “territorial integrity” to be respected following Russian President Vladimir Putin’s address on Ukraine, in which he announced a partial military mobilisation.

“We call on the relevant parties to realise a ceasefire through dialogue and consultation, and find a solution that accommodates the legitimate security concerns of all parties as soon as possible,” China’s foreign ministry spokesman Wang Wenbin told a regular pr … read more