US Secretary of State Antony Blinken on Tuesday defended military sales to Pakistan after withering criticism from growing US partner India, which considers itself the target of Islamabad’s F-16 planes.

Blinken met in the US capital with India’s foreign minister a day after separate talks with his counterpart from Pakistan.

The US-Pakistan alliance, born out of the Cold War, has frayed over Islamabad’s relationship with the Taliban regime in Afghanistan.

The top US diplomat defended a $450 million F-16 deal for Pakistan approved earlier in September, saying the package was for maintenance of Pakistan’s existing fleet.

“These are not new planes, new systems, new weapons. It’s sustaining what they have,” Blinken told a news conference with his Indian counterpart, Subrahmanyam Jaishankar.

“Pakistan’s program bolsters its capability to deal with terrorist threats emanating from Pakistan or from the region. It’s in no one’s interests that those threats be able to go forward with impunity,” Blinken said.

Jaishankar did not criticize Blinken in public. But on Sunday, speaking at a reception for the Indian community in the United States, Jaishankar said of the US position, “You’re not fooling anybody.”

“For someone to say, I’m doing this because it’s for counter-terrorism, when you’re talking of an aircraft like the capability of the F-16, everybody knows where they are deployed,” he said, referring to the fleet’s positioning against India.

“Very honestly, it’s a relationship that has neither ended up serving Pakistan well nor serving American interests well,” he said.

Pakistan’s military relies on US equipment but the relationship soured during the two-decade US war in Afghanistan, with Washington believing that elements in Islamabad never severed support for the Taliban, who seized back power last year.

India historically has bought military equipment from Moscow and has pressed the United States to waive sanctions required under a 2017 law for any nation that buys “significant” military hardware from Russia.

Speaking next to Blinken, Jaishankar noted that India has in recent years also made major purchases from the United States, France and Israel.

India assesses quality and purchase terms and “we exercise a choice which we believe is in our national interest,” he said, rejecting any change due to “geopolitical tensions.”

The United States since the late 1990s has made warm relations with India a top goal, seeing common cause between the world’s two largest democracies on issues from China’s rise to the threat of Islamist extremism.

The United States has largely turned a blind eye to India’s continued relationship with Russia since the Ukraine invasion but was pleased when Prime Minister Narendra Modi recently told President Vladimir Putin that it was “not a time for war.”

Jaishankar indicated that India was working behind the scenes, saying it had “weighed in” with Russia during UN- and Turkish-led negotiations that opened up grain shipments from the blockaded Black Sea.

“There are many more regions where we will be intersecting with American interests. It is to our mutual benefit that this be a complementary process,” Jaishankar said.

But once rock-solid support for India in the US Congress has seen gaps amid concern over rights under Modi, a Hindu nationalist whose government has been accused of marginalizing Muslims and other religious minorities and pressuring activists through legal action and financial scrutiny.

Blinken addressed the issue delicately, saying the two nations should commit to “core values including respect for universal human rights, like freedom of religion and belief and freedom of expression, which makes our democracies stronger.”

Jaishankar responded indirectly that both nations were committed to democracy but “from their history, tradition and societal context.”

“India does not believe that the efficacy or indeed the quality of democracy should be decided by vote banks,” he said.

News From Across The Stans 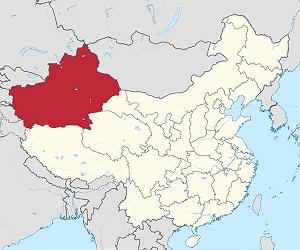 China steps up offensive at UN to tell Xinjiang ‘truth’


China sent a small army of delegates from Xinjiang to the UN in Geneva Thursday, where they spent two hours hammering home the “truth” about the rights situation in the region.

Beijing has made no secret of its displeasure with a United Nations report published last month, which warned of possible crimes against humanity in the far-western Xinjiang region.

“The assessment is based on a presumption of guilt, includes mostly disinformation and lies,” Xu Guixiang, head of the Xinjiang government’s … read more