Weekly poll: the vivo X90 series temps with cutting edge chipsets and cameras, are you interested?

In one fell swoop vivo unveiled the first phone with the Snapdragon 8 Gen 2 chipset and the first phones with the Dimensity 9200 SoC. We are talking about the vivo X90 series, of course, which will go on sale in China over the next few weeks.

And while seeing the new chipsets in action is exciting, the X90 series main focus is being the best camera phones on the market. The two Pros are equipped with the 1” Sony IMX989 sensor with bright f/1.75 apertures and OIS, not to mention all the work that Zeiss did on the lenses.

Naturally, only one can be the best and that honor goes to the vivo X90 Pro+. This is the Snapdragon 8 Gen 2 phone we mentioned, but it also has exclusive periscope and ultrawide modules. The ultrawide camera doesn’t have the widest FoV (114°), but its lens is designed for low distortion, which means less digital perspective correction is necessary. 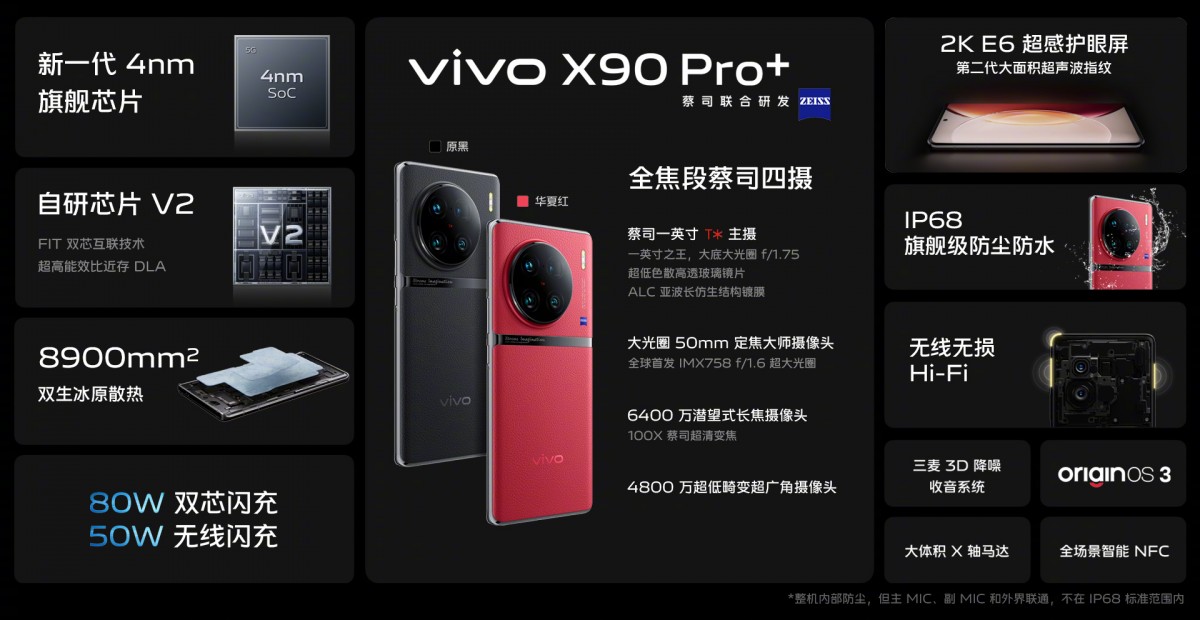 As for the periscope lens, it has 90mm focal length meaning 3.5x optical magnification and up to 100x digital zoom. The high resolution 64MP sensor helps squeeze out extra detail. There is another telephoto lens on board, a 50mm portrait cam with a 50MP sensor and a bright f/1.6 aperture. 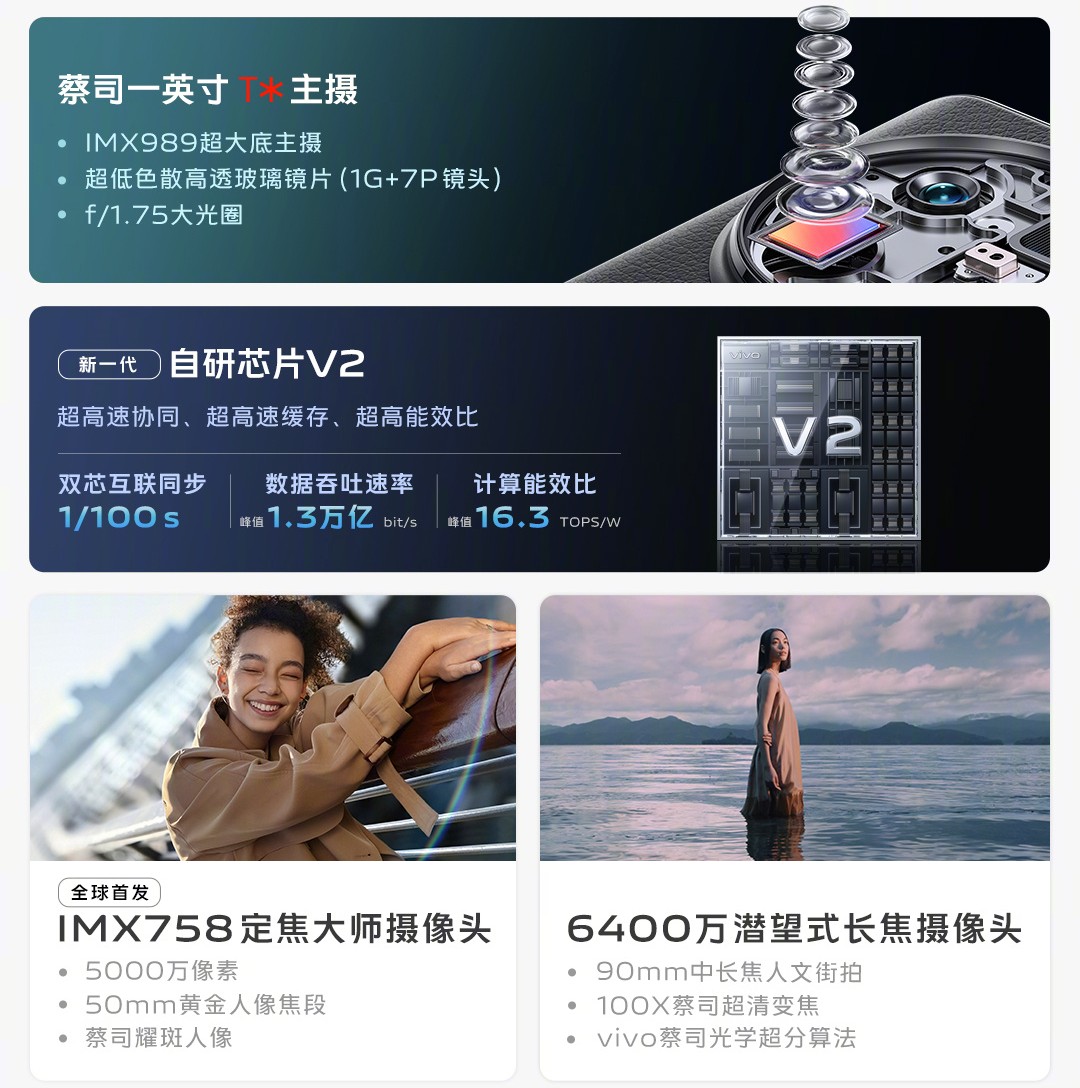 The vivo X90 Pro has the same main and portrait cameras, but loses the periscope and the ultrawide module is demoted to a 12MP sensor and a 108° lens. 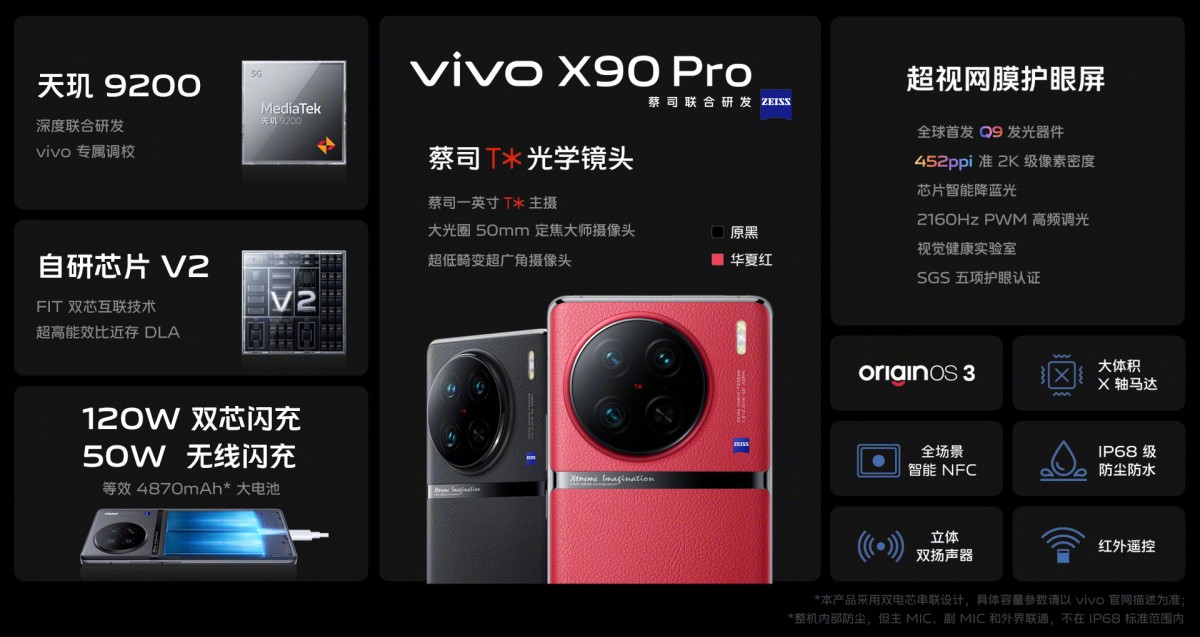 The vanilla vivo X90 takes another step down – it loses the IMX989 main sensor, getting a 1/1.49” 50MP sensor instead. Also, the 50mm camera drops to a 12MP sensor. Still, it has a powerful chipset and the help of the vivo V2 ISP to do the image processing, just like the other two. 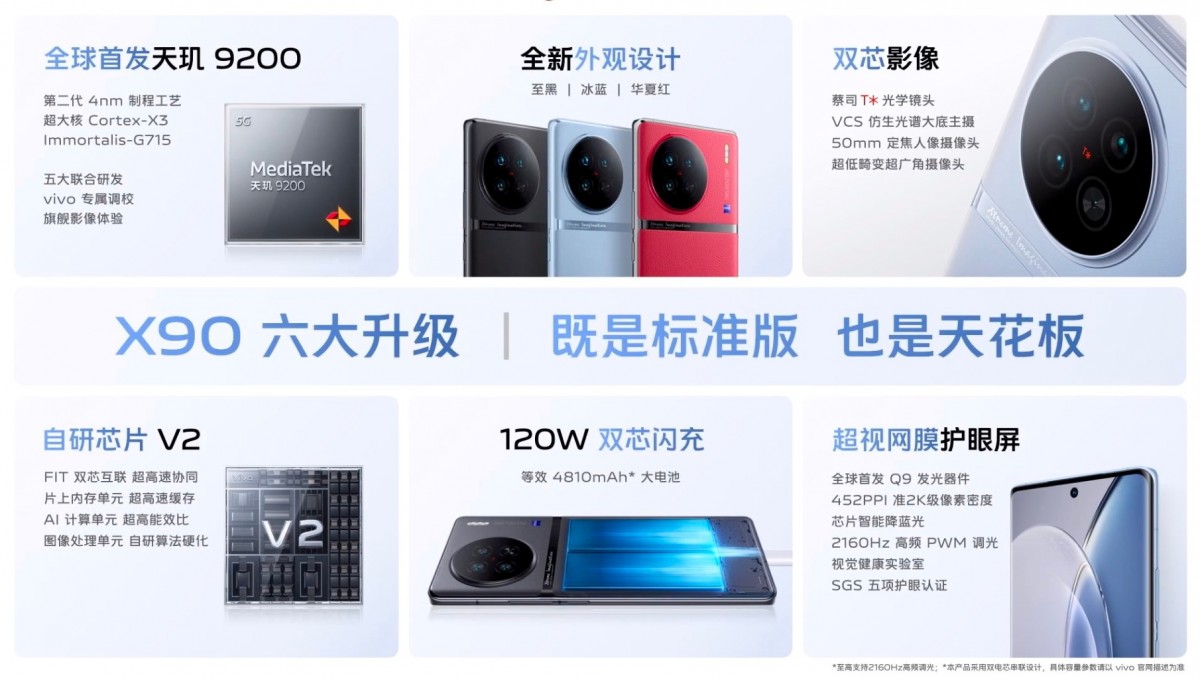 There are a few other reasons to pick the Pro+ over the others. All three have 6.78” 120Hz AMOLED displays, but only the Pro+ has an LTPO4 panel with 1,440 x 3,200px resolution. The other two skip LTPO and drop down to 1,260 x 2,800px resolution. And they use the Dimensity 9200 chipset, if that wasn’t clear, but we still haven’t tested it against the Snapdragon (we’ve only seen leaked benchmarks so far).

There’s also differences in charging. Battery capacities are roughly the same, but the X90 Pro has the fastest charging support – 120W wired (0-50% in 8 minutes) and 50W wireless. The Pro+ is slower with 80W wired charging (and still 50W wireless). The vanilla model holds its own in the wired race with 120W support but lacks wireless charging (the USB-C port also drops to v2.0, in case video out is important to you).

These three are without competition by courtesy of being the first with their chipsets. More Snapdragon 8 Gen 2 and Dimensity 9200 phones are on the way, we should see some of them before the year is out. However, we can only speculate about their prices and have only rumored specs to go on, so we’ll save that for now.

Note: we know about the Sharp Aquos R7 and the Leica Leitz Phone 2, but those are boutique devices, impossible to buy outside of Japan.

Assuming it goes international, will you buy the vivo X90 Pro+? Leaks suggest that the 1” IMX989 will be used in yet more phones. Would you rather wait for them? Or is the camera not a major factor for you? Vote below or using this page. All of this is assuming that the Pro+ will be available near you, of course.

What about the vivo X90 Pro? It’s not great at zooming in, but might prove to be better value for money – vote below on whether you are interested (or using this page if that doesn’t work).

Finally, the vivo X90 – any takers? Vote below or using this page.