Chinese scientists have reconstructed a complete dataset of the lake ice phenology of 132 lakes on the Qinghai-Tibet Plateau from 1978 to 2016, said the Chinese Academy of Sciences (CAS). The dataset was recently presented on the data-sharing platform China’s National Tibetan Plateau Data Center (TPDC).

Lake ice phenology is a perceptible indicator reflecting changes in lake thermodynamics in response to global warming. Due to the limitations of conventional ground-based observations, the lake ice phenology over the Qinghai-Tibet Plateau is rarely observed and recorded.

The research team has integrated remote sensing and numerical modeling techniques to develop a complete, consistent, and continuous time series of reconstructed ice phenology for 132 lakes on the plateau.

Based on the dataset, the research team found that for nearly 40 years, the lakes on the Qinghai-Tibet Plateau have been characterized by a delayed freezing-up time, an earlier breaking-up time, and a shorter ice-covered duration.

According to Zhang Bing, a researcher with the Aerospace Information Research Institute under the CAS, the dataset provides vital data for monitoring water quality and aquatic biota in lakes. It can be used for various applications related to climate change, limnology, hydrology, and aquatic ecology 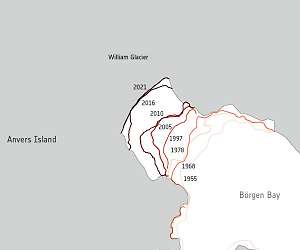 Glacier calving and a whole lot of mixing


It’s no surprise that when a massive lump of ice drops off the edge of a glacier into the sea, the surface waters of the ocean get pretty churned up. However, in addition to causing tsunamis at the surface of the ocean, recent research has led to the discovery that glacier calving can excite vigorous internal tsunami waves – a process that has been neglected in driving ocean mixing in computer models.