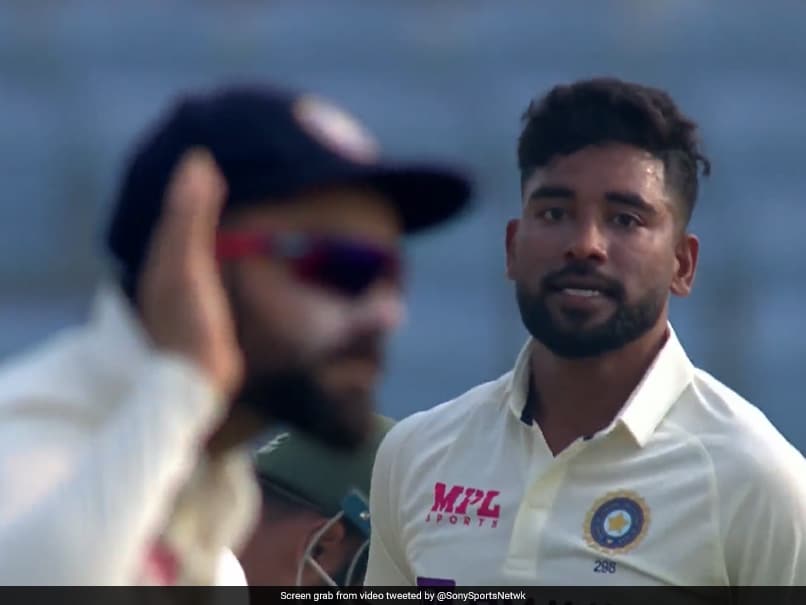 There were a couple of sledging incidents too with one involving Mohammed Siraj and Litton Das.© Twitter

The Indian cricket team ended the second day of the first Test against Bangladesh in Chattogram on a comfortable position on Thursday. In reply to India’s first innings total of 404, the hosts reached 133/8 at stumps on the second day. Spinner Kuldeep Yadav took 4/33 while pacer Mohammed Siraj returned with 3/14. There were a couple of sledging incidents too with one involving Siraj and Bangladesh’s Litton Das taking the spotlight. It happenned in the 14th over of Bangladesh’s innings during the final session of the day.

Litton Das was on 24 and had not scored a run in the third session till that point. Siraj after bowling the first ball of the 14th over walked up to Litton and told him something. To Siraj’s sledging, Das cheekily signalled that he didn’t hear anything while walking towards the India pacer. The umpire intervened as sent Siraj away. On the very next ball, Siraj bowled Das with a delivery that nipped back in. The pacer celebrated with fervour and Virat Kohli too joined in by enacting the same cheeky gesture that Litton did.

Earlier, India were all out in the second session after adding 126 runs to their overnight 278-6, with Bangladeshi off-spinner Mehidy finishing with 4-112 and left-arm spinner Taijul taking 4-133.

Ravichandran Ashwin defied Bangladesh’s attack to hit 58, the third half-century in the India innings after Cheteshwar Pujara‘s 90 and Shreyas Iyer‘s 86.

Ashwin received invaluable support from Kuldeep Yadav (40) as the duo added 92 runs for the eighth wicket. Iyer resumed on 82 but missed out on a hundred as Ebadot bowled him in the eighth over of the morning.